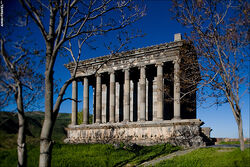 The Garni temple was constructed in the 1st century AD by the King Tiridates I of Armenia and probably funded with money the king received from emperor Nero during his visit to Rome. The temple was most likely dedicated to the Hellenistic god Mithras. The roof is supported by 24 columns with Ionic capitals and Attic basements. Unlike other Greco-Roman temples, it is made of basalt. In 1679 it was destroyed by an earthquake. Most of the original pieces remained at the site until the 20th century, allowing the building to be reconstructed between 1969 and 1979.

Retrieved from "https://caucasus.fandom.com/wiki/Main_Page?oldid=3498"
Community content is available under CC-BY-SA unless otherwise noted.